Today, I want to show you a powerful, yet simple chart pattern.

Using this pattern in the forex market has brought big, consistent profits over the years for me… And today, I’ll show you how to do the same.

This pattern is one of my favorite technical trade setups. It takes its name from the distinctive shape it makes – appearing as a left shoulder, a head, and a right shoulder – as the price on the chart makes corresponding peaks and valleys.

There’s also the neckline – which is a trendline connecting the left shoulder to the right shoulder.

Using the pattern is simple: Once the price breaks through the neckline after forming the right shoulder, you can typically expect a sharp sell-off to begin.

So, let’s take a look at what this pattern looks like in action…

Here’s a chart of the AUD/USD currency trading pair (the Australian dollar against the U.S. dollar)… 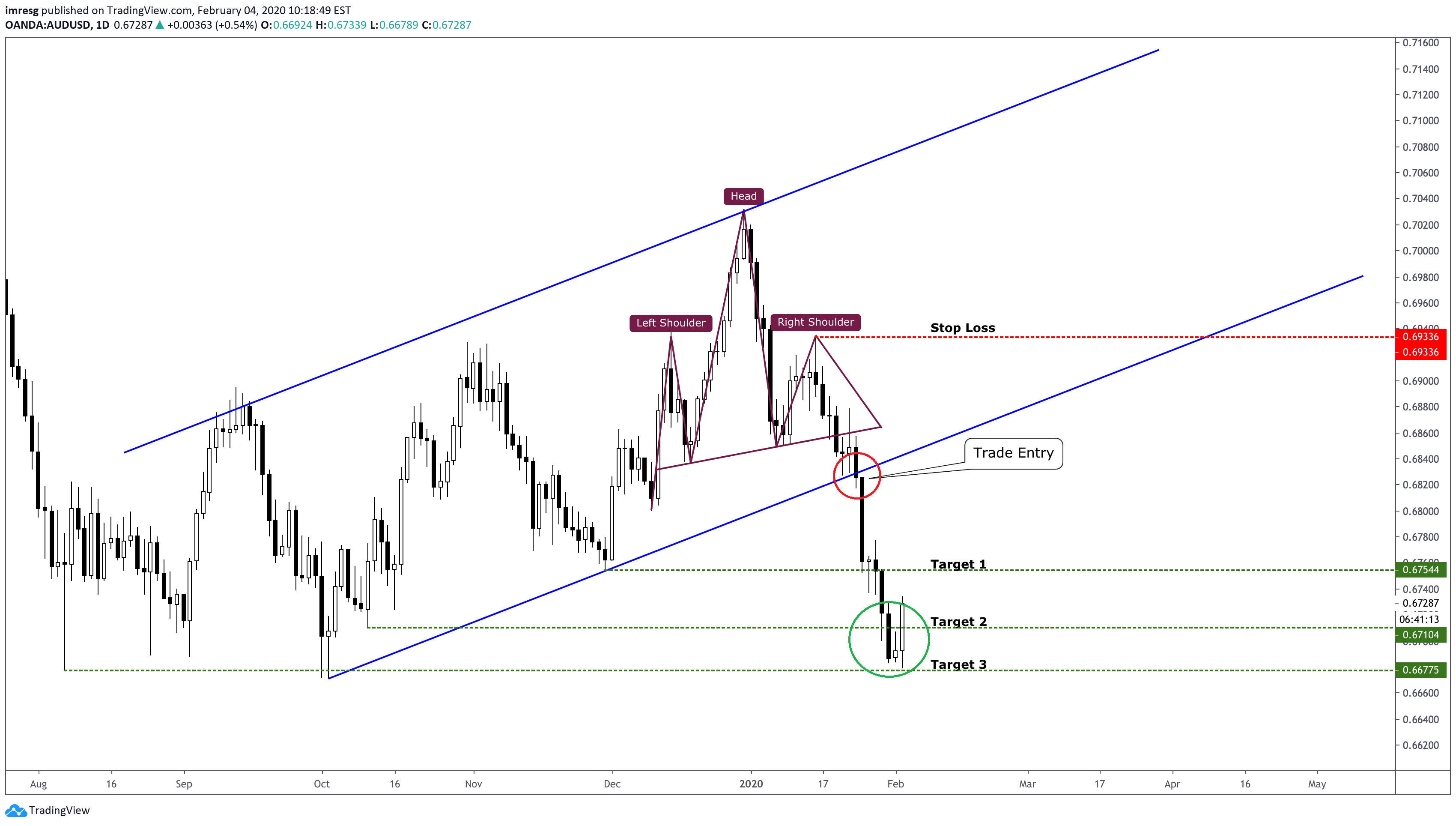 As you can see, once the price of the AUD against the USD fell below the neckline of the pattern, the price cratered 2.4% (that’s a pretty big move for a currency pair).

And best of all, the Head & Shoulders pattern made this move entirely predictable – and tradable.

You can see the entry point circled in red in the image above. And the exit point is circled in green.

So, not only does the Head & Shoulders pattern provide us with clearly defined entry and exit points (something many traders struggle with), but also with high-probability setups with great risk/reward ratios.

When you trade using the Head & Shoulders pattern, you’re likely to win far more trades than you lose… And the gains on your winning trades will be much larger than the losses on your losers.

Now, let’s take another look at the chart from above…

As you now can see, this is a textbook Head & Shoulders setup. The only potential issue we had with this pattern was the presence of the lower blue supporting trendline connecting the lows from October 2 and November 29.

I advised in a recent video that once we cleared the blue trendline, this trade would be in play. So, when the daily candlestick closed below the bottom trendline on January 24, that provided an ideal entry point for the trade.

But what about risk management, should the trade not move in your favor? And when should you have gotten out of that trade?

For that, we use stop losses and profit targets. Here’s how we determined them…

The stop loss point for a Head & Shoulders pattern usually goes just above the peak of the right shoulder, marked by the red dotted line in the chart above.

The profit targets were created by a series of prior lows for the AUD/USD pair, from November 29, October 10, and August 7.

This trade worked out perfectly, and there were multiple ways to take your profits from the market. Whether you decided to scale out parts of your position as each target was reached… or utilized a trailing stop loss… the end result was a showcase of the power of the Head & Shoulders pattern.

As you scour the markets for trading opportunities, keep this classic pattern in mind. It can provide many predictable – and highly profitable – trading setups.

As these patterns continue to compress, at a certain point – projected by Andy to be mid-2020 – the result will be a major “black swan” event. The kind that could make millionaires… or take unprepared traders for everything they have.

Andy’s putting together an urgent briefing on the event, where he’ll show you exactly how to prepare. It airs on February 20 at 8 p.m. ET.

If you want to preserve what you’ve built up in this bull market, and want to take advantage of the event Andy sees coming, sign up for it right now.