Right now, there are over 111,000 confirmed cases of coronavirus worldwide, and nearly 4,000 deaths.

After seeing a spike of confirmed cases, Italy recently announced a quarantine of over 16 million people.

Here in the U.S., the number of confirmed cases has reached over 550 across 34 states. Hand sanitizer and disinfectants are now hard to find. Shelves are empty as people panic.

They’re not the only ones, either. Wall Street is clearly fearful, too…

Since February 19, all the major indexes have dropped between 11% and 15%. And this morning, U.S. stock futures dropped more than 5%. This triggered trading halts to stem the market’s plunge.

The latest shoe to drop is the oil market. The outbreak has led to a decline in demand. And Russia refused to slash production to keep prices afloat. So Saudi Arabia retaliated with price cuts over the weekend.

Oil prices tumbled as much as 34% this morning – its sharpest single-day decline since the 1991 Gulf War. Oil companies felt the drop as well. And some analysts worry a further tumble is ahead.

So it’s ugly out there. But first things first: Don’t panic. We’ve been through worse over the years. And we got through all of it. So we’ll get through this, too.

Now, as I told you last week, I believe these fears are overblown.

In fact, the numbers of new coronavirus cases have slowed in both China and South Korea. And your chances of dying from the flu are still much higher than they are from the coronavirus.

Now, this outbreak is very serious and real. I’m not minimizing the pain and suffering.

But does it make businesses worth 20% less today than they were a few weeks ago?

And let’s say I’m wrong. Even if the markets continue to tank and a recession hits, stocks will still be one of the best places to put your money.

Today, I’ll show you why…

Recessions Don’t Mean the End of the World

The selling and volatility we’re seeing is from one factor only: fear.

The coronavirus and this energy collapse are causing knee-jerk reactions from investors. But neither of these factors necessarily mean a recession is ahead. (Although, it could become a self-fulfilling prophecy.)

Back then, 74% of economists were calling for a recession. The markets dropped about 3% in just two days.

Yet they went on to climb over 18% to new all-time highs. Despite the current sell-off, we’re still around 5% higher since then.

And here’s something else the Debbie Downers won’t tell you: Even if a recession does hit, market peaks generally follow 18–24 months after.

The chart below shows the S&P 500’s average returns following the past nine recessions since 1957: 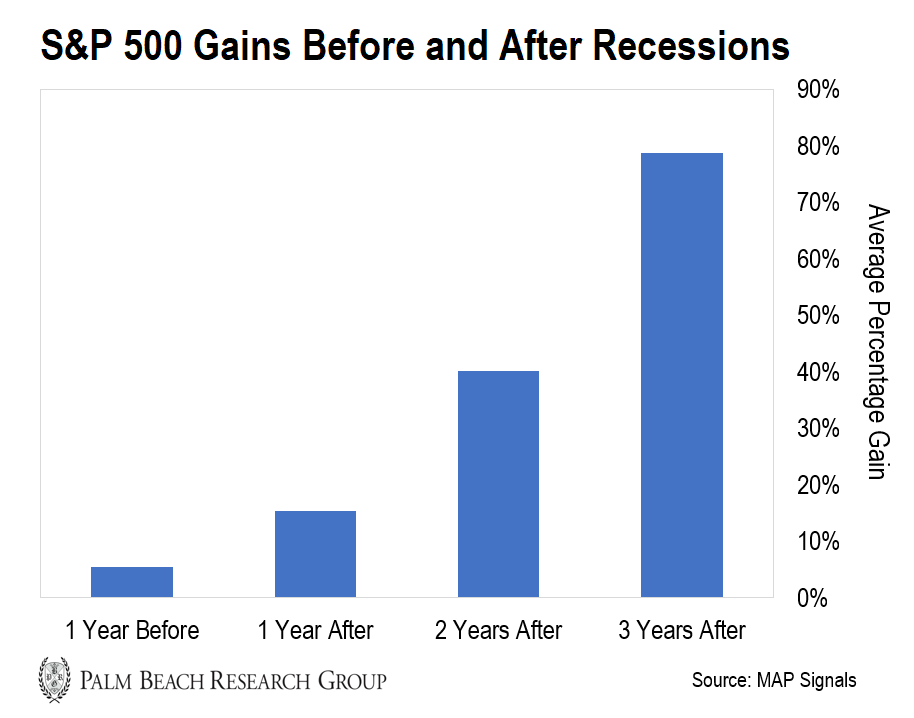 So you want to be in U.S. equities in the long term. They’ll continue soaring higher even after a potential recession.

But my “unbeatable” stock-picking system is signaling we’ll see a near-term market bottom soon, instead…

Regular readers know I spent half a dozen years and hundreds of thousands of dollars to develop my system that tracks big-money buying.

I used my experience from nearly two decades at prestigious Wall Street firms – routinely trading more than $1 billion worth of stock for major clients – to make sure it’s highly accurate, comprehensive, and effective.

It scans nearly 5,500 stocks every day, using algorithms to rank each one for strength. It also looks for the movements of big-money investors.

And it’s the same system I used to identify triple-digit winners like The Trade Desk (TTD), Paycom Software (PAYC), and SolarEdge Technologies (SEDG) for my Palm Beach Trader subscribers. (Winners that are still holding up despite this nasty sell-off.)

But it doesn’t just identify individual stocks… It can also track what the big money is doing in the broad markets, too.

And as you can see, my big-money index is still indicating major selling… 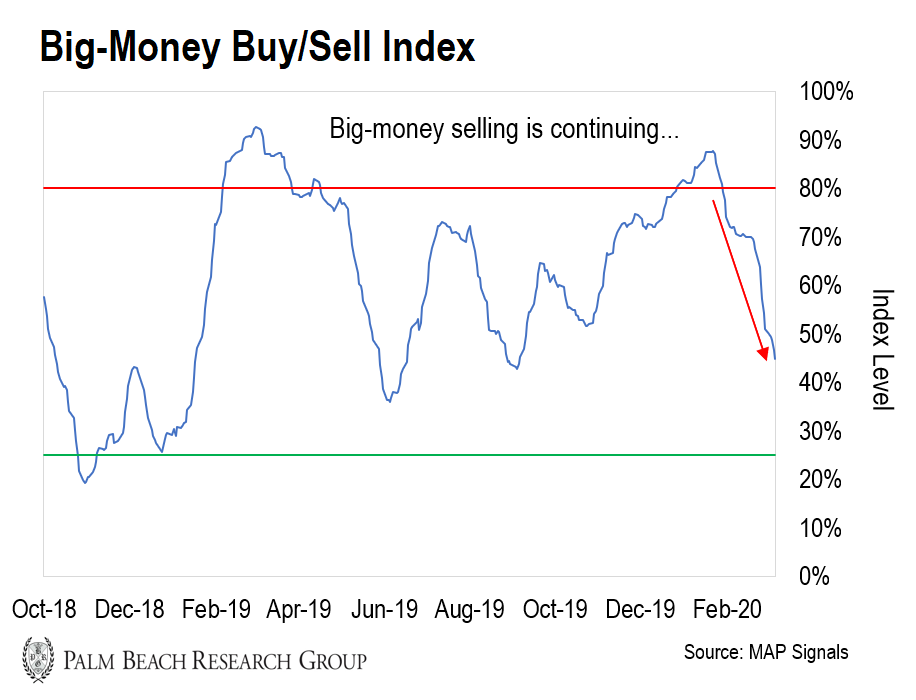 When the ratio is at 80% (see the red line above) or more, it means buyers are in control and markets are overbought. And when it dips to 25% (the green line) or lower, sellers have taken the reins, leading the markets into oversold territory.

Although we’re not near oversold levels yet, we’re quickly heading in that direction. The index is trending lower – which means lower prices are ahead.

But as I told you last Monday, market troughs come an average of three weeks later after this kind of selling. And we’re already one week into that period. So the bottom should be coming soon. (My data’s indicating a date of March 20.)

Look, I understand it’s difficult not to panic and hit the sell button when you see everything bleeding red. But the key to making money in the stock market is looking at the big picture…

We’re in the Longest Bull Run in History

Over the past 100 years, stocks have been the best place to grow your wealth. But as I’ve said before, it won’t be a straight line up. It’s normal and healthy for the market to take a breather.

And we want to own strong companies growing sales and earnings, making big profits, and carrying little debt. They’ll withstand the kind of volatility we’re seeing now – and come out shining on the other end once it passes.

So let’s wait out this sell-off. Soon, you’ll have the opportunity to buy high-quality companies at a discount, before the market rebounds to new all-time highs.

And even if the market does go even lower, you’ll still see average returns of 15.3% in the year after a short-lived recession passes.

In the meantime, don’t glue yourself to the news. It’s meant to fan the flames of fear and anxiety.

Instead, take a walk. Enjoy your family. Do something that brings you joy.

And remember, we’ll soon be finding phenomenal deals in the stock market.

P.S. As I mentioned, we’ll soon see stocks go on sale. And my “unbeatable” system scans nearly 5,500 stocks every day to identify the best of the best. It can help you spot them, too – and ride them to profits as Wall Street’s buying pushes them higher.

I put together this special presentation so you can see how it all works – including how my system can find these superstar companies with the potential to grow 1,000–10,000% before anyone else.

You can watch it for free right here.