Most investors will never pick the exact bottom of a falling market. It’s one of the hardest things to do – almost impossible.

It’s so hard, in fact, most don’t even get close to doing it throughout their entire investing career.

Though, when you have an edge, it not only becomes possible… but almost simple. And our edge in Palm Beach Insider is data. In particular, the data behind big money moves.

Here’s why I’m mentioning this today…

Over the last couple weeks, stocks experienced a 10% correction seemingly out of nowhere. Many analysts jumped the gun and said that this was the start of a second crash. They’re wrong.

In this issue, I’ll show you how we use our proprietary data signals to pinpoint market bottoms… and why you should treat any dip going forward as a buying opportunity – in a specific sector.

How We (Almost) Nailed the March Bottom

You’ll remember that back on March 10, I called for stocks to bottom out on March 20.

This was a time when the world was rapt with panic over the COVID-19 pandemic. Millions of Americans were losing jobs by the day… and things never looked more bleak. I’m sure more than a few of you read that essay and thought I’d lost it.

Now, I’ll be the first to admit I was early on that call. It took one more day of selling for stocks to bottom the following Monday. I humbly apologize for the inaccuracy.

Regardless, if you’d made the bold move to bet on America and buy stocks the day of my projected bottom – via the SPDR S&P 500 ETF (SPY), just as an example – you’d be up 49% in just under six months.

It’s hard to dissociate from the chaos in the world and focus on the data. But when you do, you can earn some monstrous returns…

And that’s why we make it easy with our Big Money Buy/Sell Index (BMI). Here’s the index from the day of the March bottom… 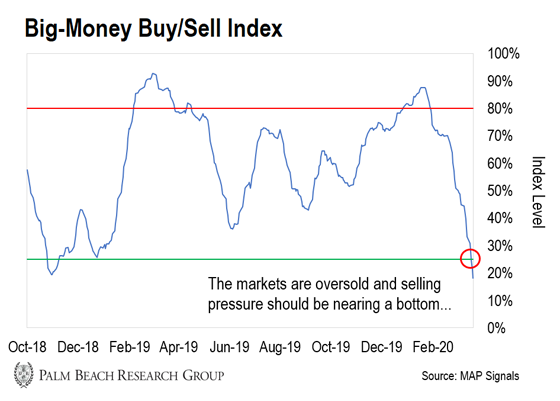 There’s a lot of complex math that goes into this index. It essentially follows the moves of the biggest financial institutions in the world, crunches the numbers, and tells us what’s likely to happen next.

But at the other end of that, what it tells us is simple: When the index level dips to 25% (the green line in the chart) or lower, big-money sellers have taken the reins, leading the markets into oversold territory. And when it hits 80% (the red line) or more, it means big-money buyers are in control and markets are overbought.

When the line in the chart above crosses below the green line, it doesn’t tend to stay below that level for long. And that’s a strong buy signal.

That’s because the big money moves markets. And when you can see what the big money’s doing, you almost don’t have to worry about day-to-day price action. You zoom out, focus on the big picture, and let the profits roll in.

Right now, stocks have fallen out of overbought territory and into our “sweet spot.” As long as the market trends up with the BMI in this spot, the market is indisputably bullish.

Now, here’s what the big money is saying about stocks today – and a surprisingly undervalued sector…

Time for you to think I’ve lost it again.

The most undervalued sector in the market, in the wake of last week’s correction, is tech stocks.

I know. Let me explain…

During the massive run-up in tech over the last few months, most of the big money was actually staying on the sidelines. Our research shows retail investors were a huge driver of the tech stock run.

But tech stocks just kept climbing… and when that happened, the big money got caught on the wrong side of the trade. They missed out on huge profits. Some funds who bravely tried to call the top in the tech sector and go short were taken out of their trades quickly.

But now, we have the correction that countless analysts were early on for weeks (us included). The weaker retail investors were shaken out of the sector, and there’s evidence that the big money is buying tech stocks with both hands – and at a discount.

Tech isn’t going anywhere. It’s only becoming a bigger force in our daily lives. And for every prominent naysayer comparing the action in tech to the 2000 dot-com bubble, there’s a virtually unknown tech company that’s quietly changing the world… and running their business well.

My job is to find these kinds of specific opportunities for my Palm Beach Trader readers, so out of respect for them I won’t reveal those plays here. But I can leave you with this…

There are a few specific subsectors within tech that I’m watching closely. Two in particular, e-commerce and semiconductor manufacturing, appear to be the best buys right now.

I recommend you start your outlier search there. And for a lower-risk play, go with the Technology Select Sector SPDR Fund (XLK). It grants you broad exposure to the biggest and best the tech market has to offer.

P.S. Next Thursday, I’ll release my next outlier stock idea to my Palm Beach Trader subscribers…

And, thanks to this recent correction, I’m even more excited to share it than when I first discovered it.

You see, outlier stocks are on sale. And I’m confident that the names I’m recommending right now will multiply several times over in the coming months. Most newsletter writers don’t have this confidence… Because they don’t have an unbeatable stock-picking system backing them up.

Learn more about it, and how you can access my next pick, right here.