If there’s one thing on everyone’s mind this year (that’s not the coronavirus), it’s the upcoming U.S. presidential election.

Election season always marks a time of contention, discord, and general chaos. That’s as true in politics as it is in markets. And we’re staring down what’ll probably be the most contentious election in years.

To the casual observer, trying to work out how markets will react to the election may seem impossible. But, over the years, I’ve actually noticed a specific trend that occurs in markets right around the November elections. It’s so consistent, trading it has become second nature to me.

But about a week ago, I got a fascinating question in my email inbox. And I saw it as an opportunity to prepare you for what’s sure to be a volatile time in the market…

Does Jason have any data showing how the stock market performs just before and after the presidential election? Has there historically been a pullback or climb before, during, or after the election?

Great question, Markus. Thank you for writing in.

This question prompted me to dig deeper into the data that makes up my Big Money Buy/Sell Index (BMI). I’ll need to do a more detailed study, but that’s beyond the scope of this issue.

Here’s what I can tell you today…

For the past seven presidential elections since 1992, I saw a clear pattern: Big money sells ahead of an election… and buys right after. Every time. 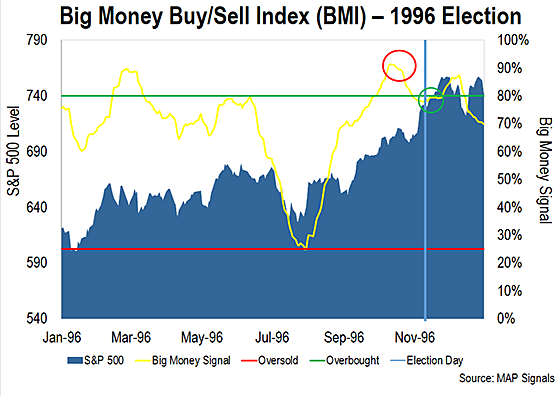 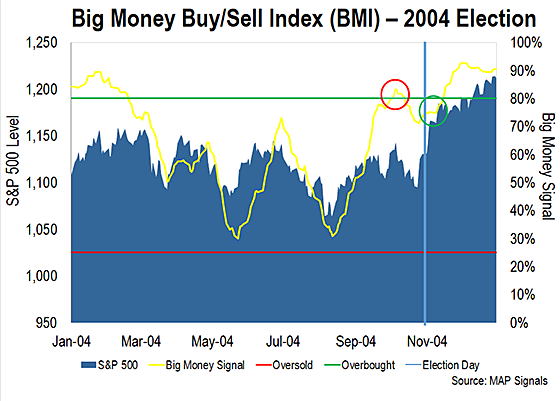 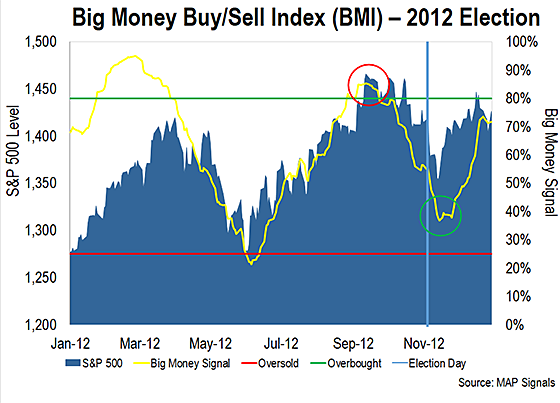 For each of those years, big money sold stocks prior to Election Day (the blue vertical line) and bought them after. We can see this by following the Big Money Signal – the line in yellow.

This BMI is a system I’ve refined for over 20 years to tell me what moves the biggest traders on Wall Street make. It’s simple: As the yellow line goes down, the big money is selling. As it goes up, the big money is buying. The red and green thresholds point to overbought conditions (a sell signal) and oversold conditions (a buy signal), respectively.

You’ll see that ahead of each election, the yellow line drops and forms a “V” of varying intensity. Also note that in each of those instances, the market did pull back prior to Election Day (the red circle).

And in all instances, the market rose after Election Day – the green circle. I can point to a similar chart for each election cycle going all the way back to 1992, and we see this same action. (Save for 2008, the year of the global financial crisis. The market eventually bottomed in March of 2009 and rocketed higher from there.)

This makes sense… especially in tight political races. The big money wants to take its chips off the table ahead of the inherent uncertainty in presidential elections. This selling inevitably drives down prices.

Then, once the dust clears and everyone can start to envision what the next four years might look like, they buy back in… often taking advantage of the lower prices. 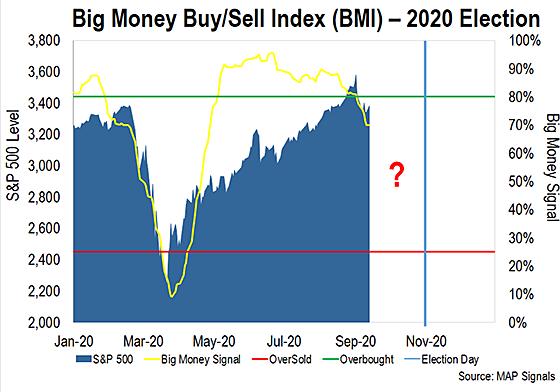 2020’s chart is obviously incomplete, but it bears a striking resemblance to 2012. And when it comes to this year’s election, I’m confident we’ll see a similar dynamic play out.

Here’s the bottom line… If 30 years of history encompassing seven elections is any guide, I’d expect a softer market ahead of the election… only to strengthen shortly after.

I have even stronger conviction that the BMI will fall prior to Election Day and rise afterward. It tracks with our theory about big money selling right before elections and buying back in right after, distorting prices in their favor.

This paints a compelling picture and reinforces what I’ve known intuitively for a long time: When the election dip comes, have a shopping list ready for the best outlier stocks – the kind that outperform the market no matter what.

And as I mentioned in Wednesday’s issue, I firmly believe that a certain subsect of tech stocks will be the outlier winners to search for.

I recommend these types of stocks – using the BMI as part of my unbeatable stock-picking system – in my advisory Palm Beach Trader. If you’re interested in how you can get involved, click here.

And thanks again for your great question, Markus.