Back then, there was a similar fervor with individual investors. It was the first time I saw ordinary investors get the jump on institutional investors.

They were coming in making all this money on little-known internet stocks in a few weeks or months.

Paravant Computer Systems was up 205%. TransAct Technologies was up 126%. And TeleTech Holdings was up 125%. They were so far ahead of the game…

Despite those gains, my institutional friends were like, “Look at these poor lemmings… They have no idea what they’re doing. This will go bad.”

These guys just couldn’t see the big picture. But I couldn’t blame them. Just think how the internet was back in 1995…

You had very limited bandwidth… You had virtually no commercial uses… You’d go online and all you’d see is pages people created to post pictures of their cats.

He went to an internet café and got online to test it out. And he told me, “I can’t invest in this. There’s nothing here!”

And I said, “You’re right! But this technology is going to change the world, you’re just seeing this at the first stage. Within a few years, everything we buy will be over the internet.”

People couldn’t understand that back then. They couldn’t grasp the revolutionary and groundbreaking potential of the internet.

And the spark came on August 9, 1995. That’s the date Netscape launched its initial public offering (IPO). An IPO is when a private company lists on a public exchange.

At that time, the internet had already been around for over 15 years. But there were just 16 million internet users. And only 0.3% of the world’s population used the internet.

Navigator was a user-friendly web browser. You didn’t need to know anything about computer code to use it. And anyone with a modem could surf the internet with ease.

By the end of 1996, the number of internet users had skyrocketed to 36 million – an increase of 125%. Five years later, the internet had a half-billion users. 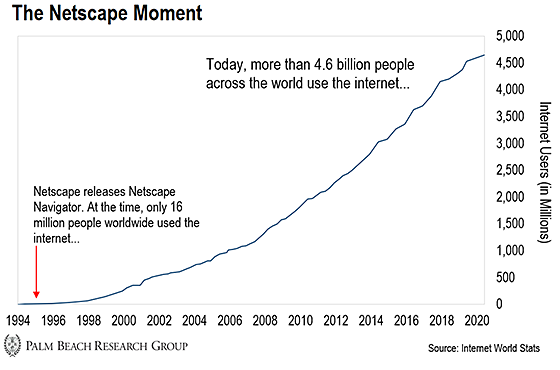 Its first-day pop of 108% was one of the biggest in history.

The Wall Street Journal reported: “It took General Dynamics 43 years to become a corporation worth $2.7 billion in the stock market. It took Netscape Communications about a minute.”

The success of the IPO inspired the term “Netscape moment.”

It thrust the internet into the mainstream… It ignited the dot-com craze from 1995–2000… And it marked the shift to the Internet Age.

The Netscape moment was the spark plug that unleashed over $5 trillion of investor capital into internet stocks in the latter half of the 1990s.

It showed Wall Street could make billions in an entirely new industry.

Before then, internet stocks had been dismissed as mom-and-pop investments. But Netscape dangled a carrot in front of Wall Street and said, “Here’s where the money is. Come and get it.”

And boy, did they go for it.

Over the next five years… Wall Street splurged on internet stocks.

Today, another groundbreaking technology is having its Netscape moment: Crypto.

That’s the date when the Office of the Comptroller of the Currency (OCC) issued guidance that banks can store and work with cryptocurrency.

Most people probably have never heard about the OCC. But it regulates all U.S. banks. So it’s one of the most powerful federal agencies in the country.

Here’s an excerpt from its landmark guidance on crypto:

We conclude a national bank may provide… cryptocurrency custody services on behalf of customers, including by holding the unique cryptographic keys associated with cryptocurrency.

This news is huge for crypto adoption. The OCC basically gave the traditional financial system the green light to come into crypto.

All of a sudden, every bank in the United States can safely get into crypto without fear of running afoul of regulators. And this move will accelerate adoption of crypto assets.

Let me put this in perspective for you…

The U.S. banking system alone touches the lives of over 300 million Americans. And it holds north of $20 trillion in assets.

If bank customers allocate just 1% of their accounts to bitcoin… bitcoin’s market cap would double.

I believe crypto adoption will be as widespread as internet adoption – maybe even more so.

For instance, the World Economic Forum estimates crypto’s underlying blockchain technology will store 10% of the world’s GDP. That’s about $8.6 trillion – by 2027.

Right now, the entire crypto market cap is just $350 billion. When hundreds of millions of people get easy access to crypto, you’ll see the entire space just explode in value – just like internet stocks in 1995.

This outperformance is even more incredible when you put it in perspective.

Remember, the stock market is on an epic rally since it crashed in March… And gold recently broke its all-time high.

Friends, the opportunity in crypto is bigger than anything you can ever imagine. So it’s crucial to position yourselves now.

Now, if you think all the gains in bitcoin are gone, I want you to think again. We’re just in the first innings of this huge trend.

Even with all this great news, most people are completely missing this story. They don’t realize crypto just had its Netscape moment.

We can easily see bitcoin eclipse its all-time high. And where bitcoin goes, the rest of the crypto market follows.

Make sure you don’t miss the boat. And if you don’t already own some, at the very least, you should buy some bitcoin right now.

P.S. As I mentioned above, bitcoin is having its Netscape moment. So we’ll see adoption skyrocket over the coming months.

But as much as bitcoin’s price will rise, the boom in the so-called “altcoins” will be much bigger. An altcoin is any other crypto other than bitcoin.

I’m so excited about getting the work out on this opportunity, I even went head-to-head with America’s biggest crypto hater, Judge Jeanine Pirro. This judge is tough, and the back-and-forth was no-holds-barred.

Take a look and let me know who you thought “won.”