Will the stock market find its footing? Or continue down a slippery slope?

Some folks will point to the pandemic-battered economy and say there’s no way stocks can keep running higher. A higher stock market doesn’t agree with their feelings about the economy. Or the mainstream news blaring out of their television.

But in Palm Beach Insider, we don’t let emotions or preconceptions dictate our investment path. We let data do the talking – specifically, our Big Money Index.

And today, I’ll show you what it’s telling us about the stock market over the next few weeks – and further down the line…

In March, guided by our Big Money Index, I told anyone who would listen to buy stocks. Meanwhile, the mainstream media was calling for a new Great Depression.

What happened next? The Invesco QQQ Trust (QQQ) – an exchange-traded fund (ETF) of tech stocks – rallied 84% trough to peak.

It just goes to show… you shouldn’t believe everything you hear. The media wants you afraid and pessimistic. That’s because their advertisers pay them money to have viewers. And when viewers are happy and stress-free, they don’t watch the news.

Now, with a bit of stock weakness, the news is coming out with plenty more negative fodder.

So, are we headed for the reckoning that many feel is long overdue? No. As I said last week, this market is just having a much-needed pullback. And that’s mainly due to profit taking in the tech sector.

For months now, new day-traders armed with stimulus checks have pushed up tech shares to a parabolic rise. I fully believe our future is tech-driven, but the recent price rise needed a come-back-to-earth moment. This is it.

And while the tech sector took headlines in last week’s selloff, only 32% of stocks in the sector experienced net selling in the past seven trading sessions.

In any case, big money is coming out of tech and energy and sloshing back into discretionary, healthcare, and some staples stocks. (You’ll remember I tipped you off to this rotation a couple weeks ago.)

On a broader level, the market at large is clearly seeing less demand for stocks. But the Big Money Buy/Sell Index saw this coming…

The Big Money Index Is Heading Back to Its “Sweet Spot”

If you’re new to Palm Beach Insider, the Big Money Buy/Sell Index (BMI for short) is our proprietary system to spot big-money buying and selling in the broad market.

And as we’ve observed for months now, the BMI has steadily fallen from its June peak – even as the market trudged higher.

Remember, when a market gets overbought, it can stay that way for a while. (This time the BMI established a 30-year record, at 84 days overbought.)

But since that peak, the big money demand for stocks has come back to earth… And we’re now officially out of overbought territory: 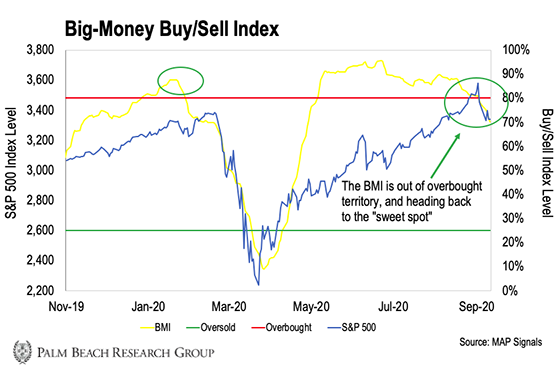 Now, when the index level dips to 25% (the green line in the chart) or lower, sellers have taken the reins, leading the markets into oversold territory. And when it hits 80% (the red line) or more, it means buyers are in control and markets are overbought.

Generally speaking, we like when the BMI is gently trending higher – but between the green and red lines. It means there’s a healthy balance between buying and selling, with a bias toward buying. That’s the “sweet spot” for a bull market. These conditions allow a gentle up-trending market to continue for a long time.

We may not see a market environment like this for years, possibly decades. Or, it may happen again next year. That’s the thing… We never know what’s to come. All we can do is interpret the data and react accordingly.

And right now, our data indicates a waning appetite for stocks in the short-term. I suspect the next few weeks will be choppy and form a base.

After that, though, buying will come in again to lift markets in the late fall and early winter.

How do I know this?

Nowhere Else to Turn

The inescapable truth is this: Interest rates will remain at near-zero for the foreseeable future.

Doing some number crunching, I found that owning the S&P 500 for its dividends is 244% better than owning the 10-year Treasury for its yield (after taxes).

Everyday investors, seeing their “high-yield” savings accounts and Treasury bond rates whittle down to practically nothing, understand this all too well.

There’s basically nowhere else for investors to grow their money but stocks. That will encourage further stock investment over time.

With these factors at play, it’s clear the market isn’t headed for disaster. It’s headed for a few weeks or months of chop before another bull run.

That means it’s time to have your shopping list ready, and to scale into your favorite positions on down days. That’s a sustainable strategy that pays off massively over time.

P.S. I’ve haven’t been this excited to buy stocks in months…

You see, the BMI isn’t just a way to see if the market is too hot or too cold. It tells me, specifically, which stocks the biggest institutions are buying right now.

In the past, the signals I get from this system have put my readers into stocks that the mainstream media didn’t pick up on until much later… After they’d already run up hundreds of percent.

My system works so well because it cuts out the emotion and “white noise” of the market. It dials in on where the big money is placing their bets… and discovers outlier stocks before they race higher. Find out more here.