Using your fingers, count the number of times you’ve gotten the market’s movements wrong. If you need many hands, you’re not alone.

We’re all occasionally wrong. But some people are wrong much more often than others. And right now, it’s the bears.

Last Friday was a perfect example…

Economists expected 8 million more job losses and unemployment to surge to nearly 20%. Meanwhile, analysts readied dire charts showing what they believed would be the highest unemployment rate since the Great Depression.

The economy actually added 2.5 million jobs, and unemployment fell to 13.3%. Naturally, the market surged on the news.

The bears got it wrong again. They were caught with shorts that were too tight – and it must’ve hurt.

(It reminds me of the movie, The Breakfast Club, when Richard Vernon says: “Don’t mess with the bull, young man. You’ll get the horns.”)

Since the market bottomed on March 23, the bears have been consistently caught with their pants down.

Meanwhile, I’ve been pounding the table and telling you the market is signaling a strong economic recovery.

Now that they’ve been proven wrong once again, let me show you where the market is likely headed next.

After all, the bears can’t be wrong all the time…

Things Are Getting Heated

I know you’ve heard me say it over and over again, but it’s worth repeating… I go by the data. And it’s almost always right.

Remember, my “unbeatable” stock-picking system scans nearly 5,500 stocks each day. It uses algorithms to rank each one for strength.

And to make sure it’s highly accurate, comprehensive, and effective, I used my experience from nearly two decades at prestigious Wall Street firms – regularly trading more than $1 billion worth of stock for major clients.

But my system does more than just look at individual stocks. It also looks at the big-money buying and selling in the broad market. 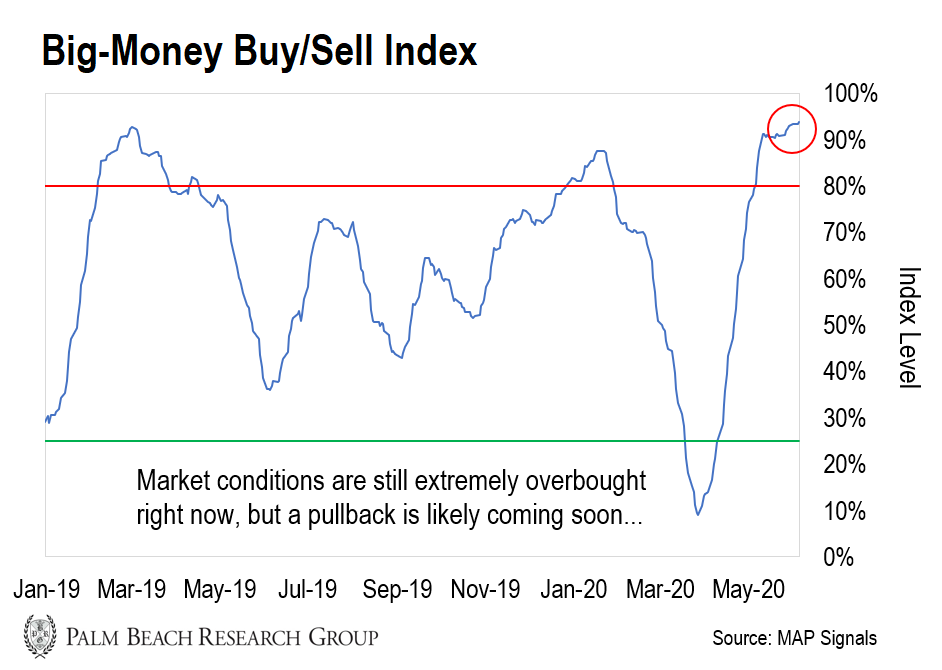 Now, when the Big-Money Index dips to 25% (the green line in the chart) or lower, sellers have taken the reins, leading the markets into oversold territory. And when it hits 80% (the red line) or more, it means buyers are in control and markets are overbought.

Currently, the index level has surged to almost 94%. So we’re in extremely overbought conditions. But the buying shows no signs of easing up just yet…

The next question is: How long will it last?

Don’t Mess With the Bulls

Take a look at the graph below. It shows the volume of big-money buying in exchange-traded funds (ETFs) since December 2004. And right now, it’s off the charts (see the green line on the far right): 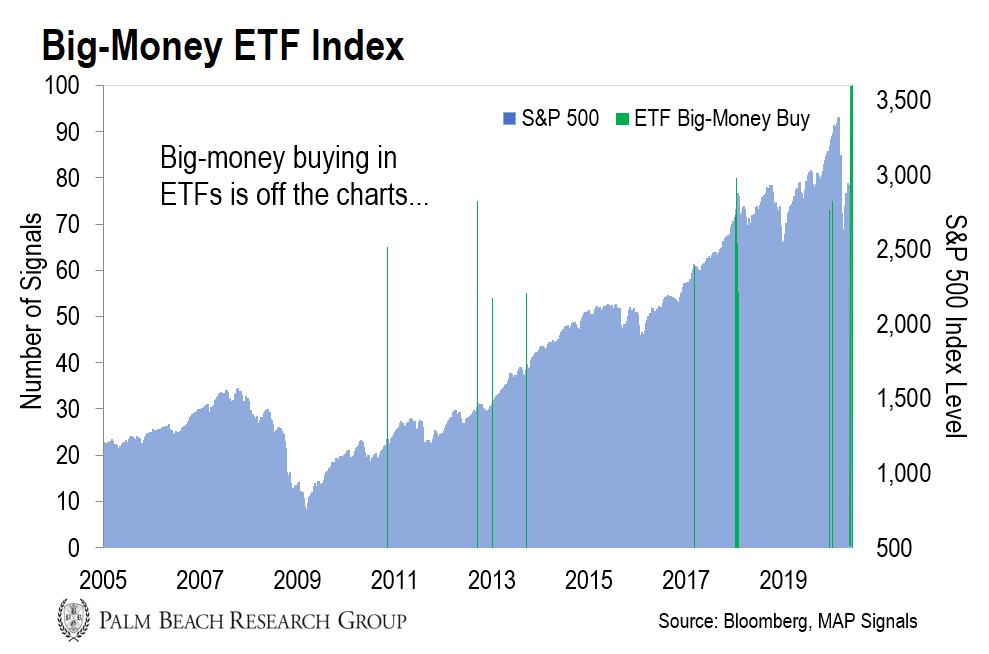 Here’s why this chart is important…

ETFs offer broad exposure to the market. So big-money activity in ETFs is a strong proxy for the market.

In fact, my data suggests record-breaking amounts of retail money is plowing into the market. And consumer trends back it up.

According to data aggregation firm Envestnet Yodlee, stock trading was among the most common uses for the government stimulus checks in nearly every income bracket.

For many consumers, trading was the second- or third-most common use for the funds (only behind increasing their savings and withdrawing cash).

Mom and pop are usually the last to the party. So this is a sign that this current rally is likely getting long in the tooth.

However, this buying could still continue for a while longer.

You see, over the last 30 years, my data shows overbought periods like this last an average of a month, but as long as over three months…

Since the market went overbought on May 6, we’ve already hit that month-long average mark. So we could see a pullback any day now. That could be tomorrow or two months from now.

In the meantime, we’ll continue to ride the wave until it crests – and keep some cash on hand. When the market finally does pull back, we’ll have good entry prices on some high-quality stocks.

P.S. Don’t forget… My system follows the big money’s lead in all market conditions – including during the upcoming pullback.

So it’ll continue to take the emotions out of investing – and identify huge winners that lead you to profits – no matter where stocks are headed next. It can help you target the best stocks out there, so you can add them to your shopping list.

And I’ve put together this special presentation to show you all the details of how it works. So be sure to learn how you can access my system’s data right here.