When you’re looking for someone to fill a position, you have to consider what type of hire you want to make.

Some people might be looking to hire someone for cheap. They may look past things like a terrible résumé and a poor interview if they think they can hire a person for pennies on the dollar.

I go about it the opposite way. Salary isn’t the biggest factor. I want the top candidate for the job – the person with the spotless résumé and the numerous accolades. That’s the one who will benefit the business.

And in the long run, I’m usually right.

The worst candidate, who was hired to save the company some cash, usually ends up costing it more money due to their poor performance… while the best candidate ends up being worth the extra money because they make the business profitable.

In business, you get what you pay for. And the same is true with investing.

The S&P 500 just hit an all-time high, despite the economic calamity caused by the coronavirus pandemic. But as I’ve told you before, I still think stocks have room to run higher.

But this is a dangerous time to be an investor…

You see, with nominal stock prices rising every day, retail investors start looking for “deals” in the market.

They’d rather buy stocks that trade in the single- or low double-digits range… than “expensive” but phenomenal companies like Amazon and Tesla (which currently trade around $3,285 and $2,050, respectively.)

Buying companies solely because they trade at low nominal prices is like trying to save a few bucks on a subpar employee – in the long run, it won’t be worth it.

Watch Out for Value Traps

Sometimes, a company can look cheap… but isn’t. It’s actually a “value trap.”

A value trap is a company that appears cheap because of a large price drop in its shares. But it’s actually expensive compared to its future growth.

For the perfect example of a value trap, look at what happened with General Electric (GE) a few years ago.

So it seemed like a good deal to buy one of the most admired businesses in the world for cheap.

But if you took a look at its past performance, you would’ve known that GE’s résumé wasn’t up to snuff.

Regular readers know I’m a numbers guy. I let the data lead me to profits, instead of blindly following the headlines to losses.

That’s how I’ve managed to avoid these value traps.

I look at the underlying data instead of scouting for companies trading at nominally “cheap” prices. And I identify companies with good “résumés” – meaning they’re growing sales and earnings year-over-year, in sectors that are booming.

But there’s another ingredient to our success: big-money buying.

You see, I’m not the only one who looks at stocks this way. The big-money institutions do, too. I know because I spent nearly two decades on Wall Street using this same strategy to make our clients rich.

And what I learned is that when a solid company sees interest from the big money, that means it’s a great money-making candidate.

You see, these guys employ armies of researchers and spend hundreds of millions of dollars per year on research. So they’re basically doing the “interviewing” for us. We just need to follow their lead on the best candidates out there.

That’s why I developed my “unbeatable” stock-picking system. It scans nearly 5,500 stocks every day and ranks them for strength using algorithms. But it also looks for the movements of big-money investors.

When it sees them piling into or getting out of a stock, it raises a yellow flag. Then, I put these yellow flags through another filter. 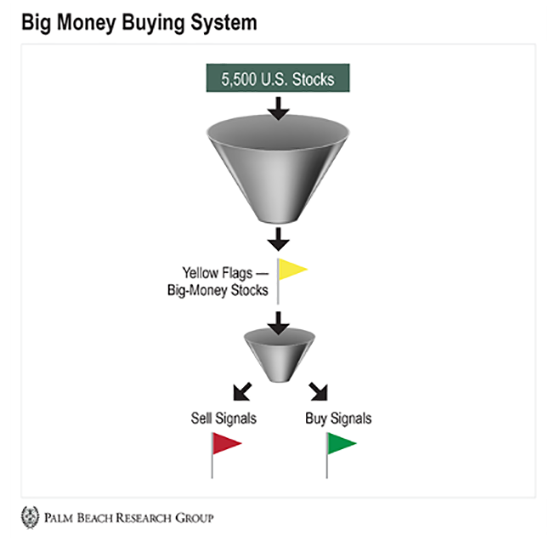 It’s that simple. So, when I see green, I know a stock has “passed its interview.”

Now, my system also looks at the broad market as well. And while it’s still signaling that it’s overheated, it also says that the big money will continue to push this market higher.

So it’s not the time to look for cheap “deals.” They’ll land you into value traps. Instead, buy the candidates that the big money is interviewing. They’re the cream of the crop – and they’ll be worth much more to you in the long run.

And if great companies with high nominal prices still seem out of your reach, there’s another way for small investors to buy them: fractional shares.

Fractional shares are simply a fraction or part of a full share. This means you can invest whatever dollar amount suits your portfolio best when it comes to certain companies with higher nominal share prices. Sometimes, it could be as little as $5–10.

Some online brokers, like Fidelity and Interactive Brokers, make it easy nowadays to purchase fractional shares. In fact, I’ve bought fractional shares for my kids on my Fidelity app. Be sure to consult your individual broker to see what options are available for you.

P.S. Thanks to my system, we don’t have to worry about timing the market to pick up the best deals. It can identify winners in any type of market, bear or bull.

It’s why our Palm Beach Trader portfolio has a win rate of 70% right now… with an average gain of 47%. That’s the power of piggybacking off of stocks with big-money buying behind them.

And my system is already zeroing in on the next batch of winners. You can go here to find out more.