It was just an ordinary trade… but it would quickly go on to be the biggest trade of my life.

It all start­ed as a normal $20 million order for 1 million shares – in one day. I never would’ve dreamed of what it would become…

In 2010, I was the head of my trading desk at Cantor Fitzgerald. And a friend from another big bank called me to buy some stock for a big client. Let’s call it KDQ…

My firm matched big institutional buyers with sellers. So in a few minutes, I found a seller and offered my friend 100,000 shares (about $2 million worth). He bought it instantly.

By the end of the day, I sold him 1 million shares of KDQ – which was worth about $20 million.

And the next day, I sold him another 1 million shares of KDQ. By then, the price was clearly lifting.

The same thing happened the third day. Another 1 million shares; another lift in the price. And then again on the fourth day…

After about a month, I’d mopped up and sold him every share of KDQ that I could find – about 20 million shares (worth over $500 million).

At that point, the stock had risen 70%. It was so much that it was making headlines on CNBC.

A few days later, I finally found out who the buyer was: a $20 billion hedge fund. In total, it acquired more than 15% of KDQ by buying 50 million shares through me and my competitors.

That’s when I knew this was something special…

Because imagine how much you could’ve made if you’d bought KDQ before the hedge fund completed its full order.

Here’s why I’m telling you this story… It explains why I launched this new e-letter, Palm Beach Insider.

I’ll let you in on something…

Some people in dark rooms on Wall Street know about huge trades like KDQ before they happen. And they profit from them. It’s just a fact.

But if you’re experienced and watch carefully, you can detect early signals when these institutions get started early on, too.

This massive order and others that I’ve handled throughout my career taught me how to recognize these giant trades.

You see, there’s a key difference between when big institutions buy stock and when you or I buy stock.

When we want to buy, we open our brokerage account, click buy, and move on with our day. The entire process takes a minute or two. But when big players want to buy 50 million shares, they have to do so over several days.

The first day, they’ll rush to grab a chunk of stock because they know they’ll move the price higher. They try to “front-load” their orders in the beginning to get better prices.

When this type of buying begins, you can jump in while the “big money” continues buying for days, lifting the stock higher.

Now, this may sound like frontrunning, which is defined as “using privileged information to act beforehand for your own benefit.” Frontrunning is a very effective and predictable way to make money. But it’s also illegal and dishonest.

So wouldn’t it be great to get a legitimate “heads up” when the big money was stepping in to buy stock?

We track what these big-money buyers are doing before everyone else catches on. And then, we follow them to profits…

To follow the big money, I created an “unbeatable” stock-picking system that can get you as close as legally possible to frontrunning these massive orders.

I used my experience from nearly two decades at prestigious Wall Street firms – regularly trading more than $1 billion worth of stock for major clients – to make sure it’s highly accurate, comprehensive, and effective.

It scans nearly 5,500 stocks every day, using algorithms to rank each one for strength. It also looks for the movements of big-money investors. And when it sees them piling into or getting out of a stock, it raises a yellow flag. 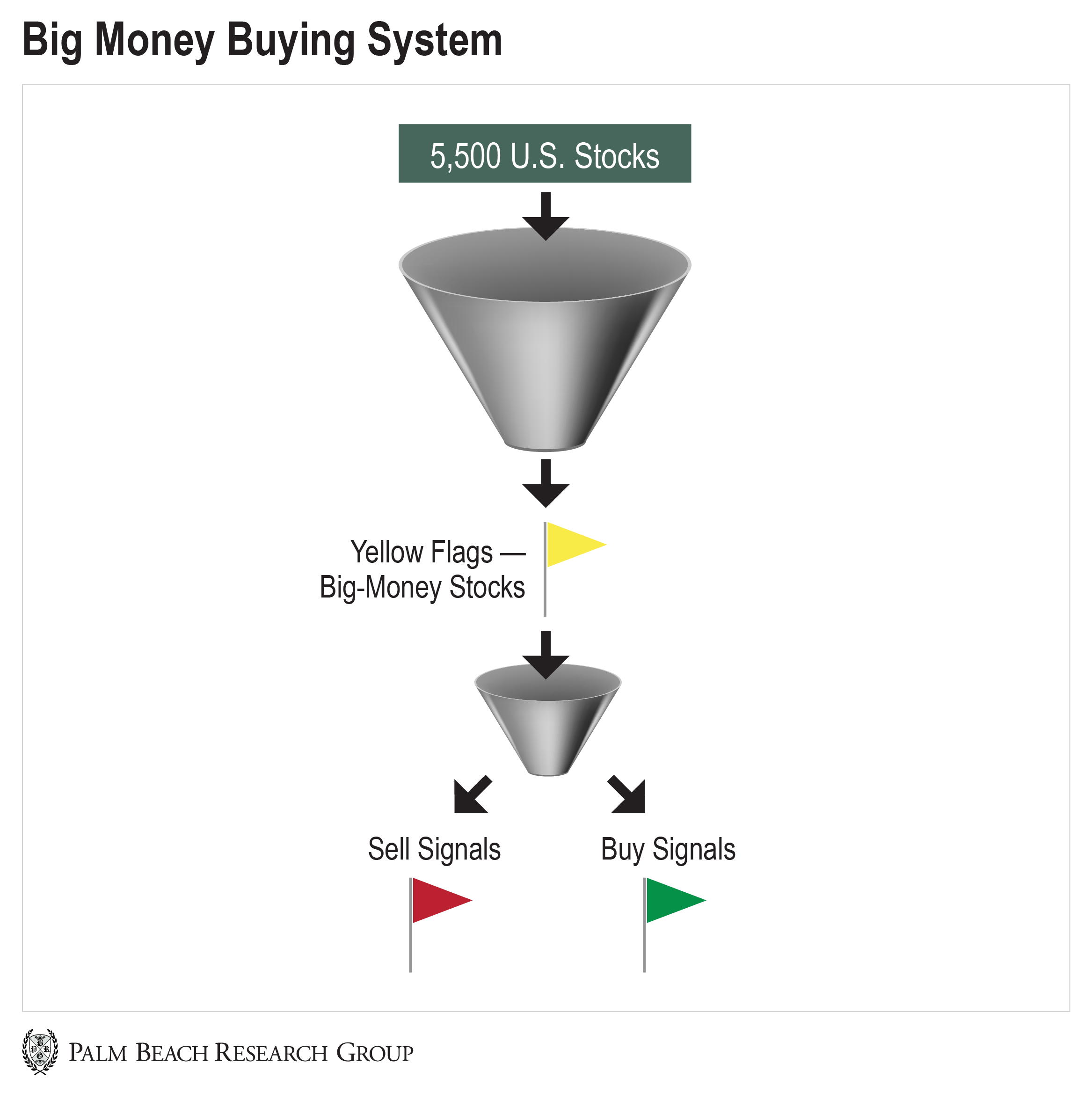 It’s that simple: When I see green, the big money is buying.

And it’s identified companies like The Trade Desk (TTD) and Paycom Software (PAYC) for my Palm Beach Trader subscribers. After taking their original investments off the table, they’re still up about 243% and 184%, respectively.

But here’s the thing: My unbeatable system doesn’t just look at individual stocks. It can track big-money buying and selling in the broad market, too.

And in Palm Beach Insider, we’ll use that edge to our advantage…

What You’ll Get With Palm Beach Insider

Every week in Palm Beach Insider, I’ll tell you where my system sees the big money is headed – so you can position yourself to profit.

Look, when you find an edge like my unbeatable stock-picking system, it’s important to exploit it. And my system stacks the odds in our favor.

Do we win all the time? Absolutely not. We’ve had our share of losers and disappointments. No one likes losing, but it’s part of the game. In fact, if someone tells you they win all the time, you should run the other way.

The key to my system is, it picks way more winners than losers – and the gains are much bigger than the losses.

With its fantastic track record, my system is truly unlike anything else out there. And I’m excited that you’re joining me for this ride.

So be sure you check your inbox every Monday and Wednesday at 5:30 p.m. ET for my exclusive insider insights.

If you’re looking to profit from the markets, you won’t want to miss them.

P.S. As I mentioned above, I used my experience from nearly two decades at prestigious Wall Street firms to develop my unbeatable system.

It took half a dozen years and hundreds of thousands of dollars to create, but it’s highly accurate and effective. You see, my system uses specific algorithms to look for this big-money buying activity. And it can predict the activity up to 10 days in advance.

So if you sign up today, I’ll show you how to get a discount on your first year of exclusive access to my system… Plus, you’ll get my 10x guarantee: If my system doesn’t hit its goal, I’ll reach into my own pocket and buy you another year of Palm Beach Trader.

You can learn how to get in on the best stocks before the big money lifts them higher with all the details right here.