Jesse Livermore was one of the greatest traders who ever lived.

He was famous for his amazing timing on his short trades, in which he would bet against the market.

In fact, he shorted the market just before the Great Depression hit, netting him about $100 million in profit once the market tanked – equal to about $1.5 billion today.

A lot of Livermore’s tactics amounted to market manipulation and are outlawed today. But we can still learn a lot from one of his legitimate practices.

You see, he liked to do small test trades to see if the market could absorb his order. For instance, he would put in a small sell order to see how strong the market was.

This gave him a sense of which way the market was headed, so he could adjust his bets appropriately. It’s how he cashed in on the market’s huge up-and-down swings.

And just like Livermore, we can tap into which way the market is headed today… by following the big money’s moves.

(If you want to learn more about Livermore, I suggest you read Reminiscences of a Stock Operator by Edwin Lefèvre. I’ve read this book many times. In fact, I’ve even coded some of Livermore’s lessons into my “unbeatable” stock-picking system.)

Below, I’ll get into what signals the market is sending us right now… and which sectors are poised to benefit in the short term…

I drew plenty of inspiration from Livermore’s trading style when I built my “unbeatable” system.

Even back in the early 1900s, Livermore knew how much of a role the big money played. And the same is true today.

That’s why I created my system to give us a sneak peek at how the big money is affecting the markets.

Regular readers know it scans nearly 5,500 stocks every day and ranks them for strength using algorithms. But it also looks at the big-money buying and selling in the broad market today.

And here’s what it’s showing us right now: 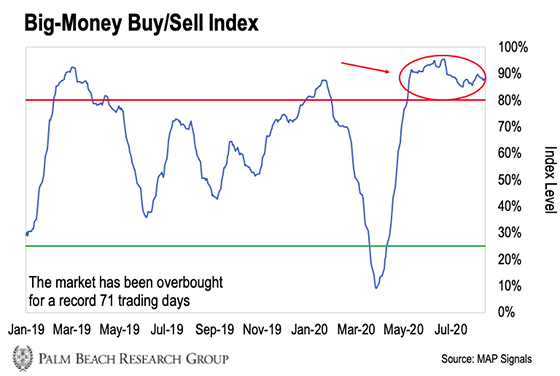 Now, when the index level dips to 25% (the green line in the chart) or lower, sellers have taken the reins, leading the markets into oversold territory. And when it hits 80% (the red line) or more, it means buyers are in control and markets are overbought.

As I’ve mentioned before, we’re currently in a record overbought period of 71 days. That tells us that the market is incredibly overheated. But which way are we headed next? For that, we have to dig a little deeper…

Take a look at the graph below. It shows the volume of big-money buying and selling in exchange-traded funds (ETFs) since January 2018. 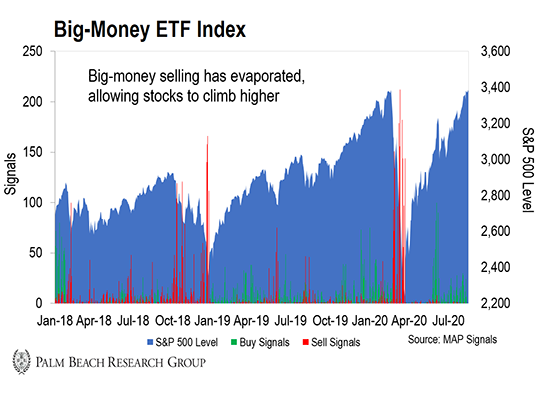 ETFs offer broad exposure to the market. So big-money buying and selling activity in ETFs is a strong proxy for the market’s movements.

Here, we can see a correlation to big buying in ETFs (the green lines) and near-term peaks in the market. But what’s really telling are the sell signals (the red lines).

Look how perfectly those sell signals lined up with the troughs in the market in December 2018 and this past March. This was how my system was just one trading day off in predicting the market bottom five months ago.

Now, look at the far-right side of the chart. Notice how there’s no red even as big-money buying has dipped. That means sellers have almost completely vanished, and buyers are in control.

If we dig deeper, we can see which sectors are seeing the most big-money buying. Take a look at this table of buy and sell signals by sector. 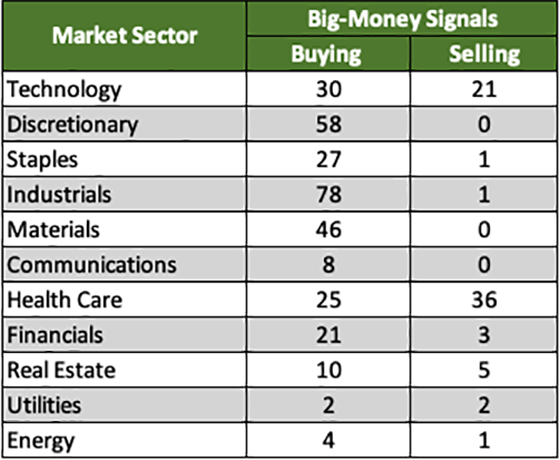 For months, tech and health care have benefited from big-money buying. But you can see that both sectors are starting to see increased selling.

In contrast, industrials and discretionary stocks are taking the lead. It’s becoming apparent that while the big money is still flowing into broad stocks, it’s starting to rotate out of tech and health care and into these sectors.

If you want to take advantage, consider buying the Industrial Select Sector SPDR Fund ETF (XLI). It’ll provide some exposure to industrials as the big-money buying ramps up in that sector. Just remember to position size appropriately.

P.S. To know where the market’s headed, you have to follow the big money. It’ll show you the way to profits, even through volatile conditions.

And my job is to find these gains for you using my system.

It pinpoints the best outlier stocks that’ll rocket higher. In fact, it’s already identified several winners for my Palm Beach Trader subscribers, including gains of 420%, 279%, and 183%.

So don’t miss out on the next wave of big-money gains. You can join us right here.