The world spent the last three decades focused on globalization…

And for a time, it worked reasonably well…

The world experienced an unprecedented period of growth, improvement in quality of life, and access to goods and services at lower prices. This ultimately brought more than a billion people out of poverty. And the world became more interconnected and interdependent than ever before.

But society also began to recognize the practical and ideological issues with the global manufacturing architecture that the world spent three decades building.

Western countries and companies recognized severe issues with child labor, lack of environmental regulations, and “dirty” energy used for production. And intellectual property theft has been an issue for the last two decades.

But there is an even bigger issue with this system. The system is fragile. Very fragile.

When the world is functioning normally, it’s hard to see it. And without a catalyst, the world may never have realized it. COVID-19 was that catalyst.

And this is not just an economic problem. It could be a matter of national security.

Woodcock is a medical doctor and director of the Center for Drug Evaluation and Research, part of the Food and Drug Administration (FDA). She presented to the Subcommittee on Health within the Committee on Energy and Commerce in the U.S. House of Representatives.

Woodcock’s presentation outlined a critical perspective on national security with regard to drugs (pharmaceuticals) on the U.S. market. Specifically, she showed where drugs are manufactured around the world. 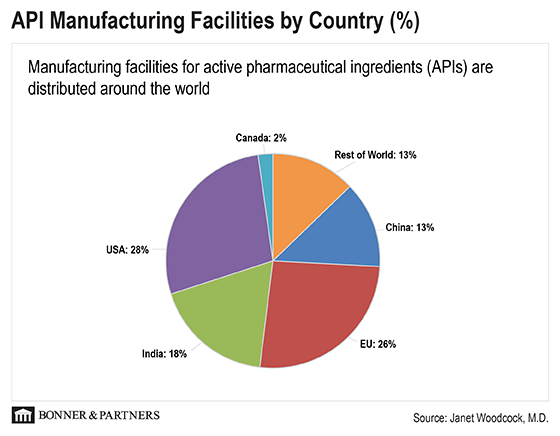 She highlighted the distribution of manufacturing facilities for active pharmaceutical ingredients (APIs) around the world. The U.S. and Europe maintain 28% and 26%, respectively. China and India are also well-represented, with 13% and 18%, respectively.

When considering only the drugs deemed essential by the World Health Organization (WHO), the presence of China is more strongly felt. 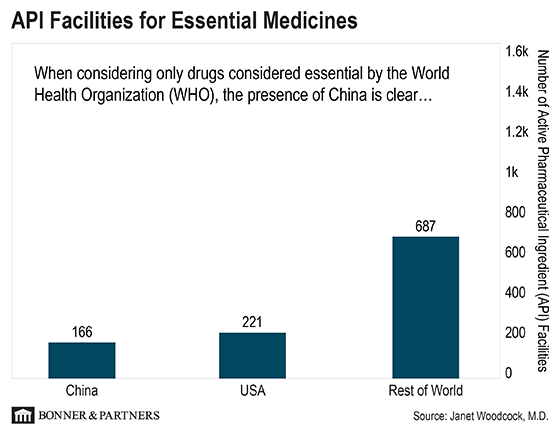 MCM drugs are used to counter biological, chemical, nuclear, or radiation threats. They also include drugs to combat influenza and airborne viruses like coronavirus.

In the case of the biological drug category, the U.S. only has 19 facilities, and China currently has 37.

China also has a large market share of the active ingredients in most generic medicines.

But the most surprising part of Woodcock’s testimony wasn’t what she said. It was what she couldn’t say.

The biggest risk to the U.S. and its access to its critical drug supply was this: The FDA simply doesn’t know exactly which APIs are being produced by which manufacturing facilities. More importantly, it doesn’t know what the volume of API production is, either.

The key is not the number of API manufacturing facilities but the volume of production. And the U.S. and Europe simply don’t know.

Can we see why a fragile global supply chain might be a risk, especially during a pandemic?

Earlier this year, supply chain problems contributed to shortages of equipment like hand sanitizer and surgical masks. But what if medical facilities were unable to get the lifesaving drugs their patients need because the global supply chain was disrupted? We can imagine the consequences of that.

Governments and corporations are making that calculation right now. And they will take action to address the problem.

A Return of Manufacturing

I predict the U.S. will migrate to advanced manufacturing of APIs. Manufacturing will return onshore, and the country will reduce its heavy dependence on foreign sources of drug ingredients.

This will reinvigorate U.S.-based manufacturing. It will also bring new jobs and a dramatic increase in API quality, which can be a problem with active ingredients manufactured in China and India.

And it won’t just be APIs that return onshore. I predict manufacturing from several industries will move back to the U.S. COVID-19 has shown that the supply chain risks are too great.

Critics might say that the costs of production will be too high to bring manufacturing back onshore. But that’s not the case.

Take a look at this… It’s a manufacturing cost competitiveness index at a country level. 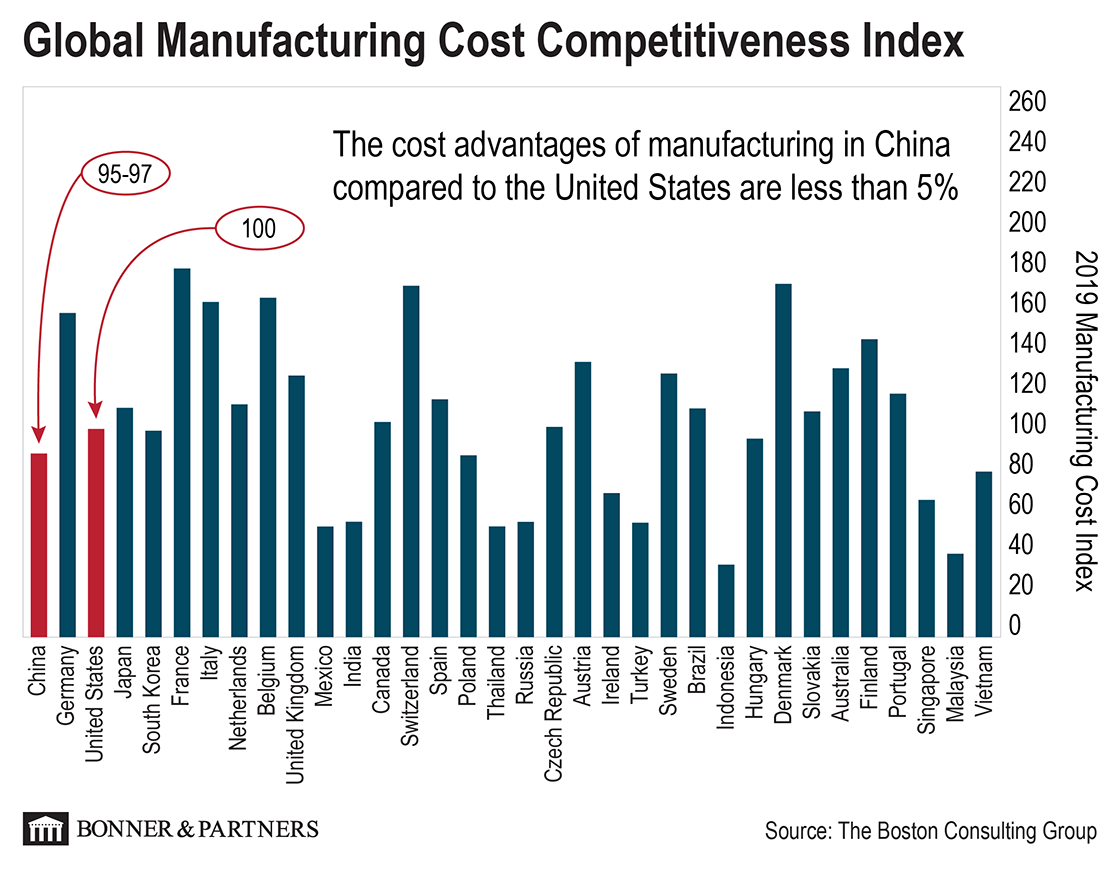 The Boston Consulting Group puts together its Global Manufacturing Cost-Competitiveness Index every year that analyzes the cost of manufacturing around the world. It does this country by country, indexed against the U.S. market.

And the results from 2019 are striking.

The cost of manufacturing in China is almost on par with the U.S. Its index range is 95–97 compared to the U.S., which is indexed at 100.

That means, on average, the advantages of manufacturing in China are less than 5% compared to the cost of manufacturing in the U.S. And the index doesn’t consider factors like supply chain risk, tariffs, intellectual property theft, quality problems, or logistics costs.

What does this mean? It tells us that the competitive advantage of manufacturing in China is not nearly as large as we might think. Very likely, it’s negative.

How is this all possible? Simple.

Bottom line: COVID-19 has taught the world a painful lesson. The global supply chain is far more fragile than many realized. The world – and the U.S. in particular – is going to migrate manufacturing back onshore.

And bolstered by technology like advanced robotics and 3D printing, the country will experience a “manufacturing renaissance.”

P.S. We are on the verge of an American manufacturing renaissance. Manufacturing is coming back to America, where the finished products will be closer to the markets they serve. That’s why I believe we are about to enter a new “Golden Age” of American prosperity.

Yes, it will take some time to recover from the economic lockdown we’re experiencing. But the American economy will come roaring back. That’s why I’ve been preparing my readers with a handful of “Golden Age” investment recommendations.