In April 2019, sentiment in the crypto market was still in a pit of despair…

Bitcoin had dropped more than 65% from its all-time high the previous year. The crypto market as a whole was down as much as 70%. It was a bloodbath.

Skeptics were out in droves predicting the death of all things crypto.

But I saw signs of life coming back into the space. After 15 months of lower lows, I could see bitcoin was trying to break out of its downtrend. What started getting me really bullish again was the stream of good news coming out on bitcoin.

Major financial firms like Fidelity were setting up crypto services. And Facebook and JPMorgan Chase had announced plans to launch their own internal digital tokens.

My research told me the biggest players on Wall Street and in Silicon Valley were coming into crypto. And it had to drive prices higher. But what really got me bullish was how the entire market was ignoring the good news.

Whenever I see a beat-up asset start coming out with great news while the market ignores it… it’s almost like I can smell the money to be made. I’ve learned it’s only a question of time before investor perception catches up with reality.

And that’s why on April 3, 2019, I issued an update to my elite Palm Beach Confidential crypto service. I told my subscribers now is the time to double down on some of our open positions.

More recently, on July 22, 2020, again, I saw a massive disconnect between improving fundamentals and prices. At the time, PayPal had just cut a deal with a crypto provider that many believe will allow it to offer crypto to its 325 million members.

The market could have cared less… as bitcoin stayed stuck around $9,500. I knew that was insane. This was the most bullish news to hit bitcoin in three years, and the market was yawning.

That’s why I filmed a special video for my Palm Beach Confidential subscribers, pounding the table on bitcoin and the altcoins. (Paid-up subscribers can watch the video right here.)

My point is, when the fundamentals improve in a massive way, but the price doesn’t… that’s your signal there is big money to be made. Like I said, when I see this happen, it’s almost like I can smell the money.

And right now, there’s one sector that just reeks of money to be made. You’re not going to want to hear about it. You’re going to say, “No way.”

I hear you. I really do. This sector has toasted investor capital for the last 18 months. But I’m telling you, now is the time to start getting back in.

That’s why today, I’m recommending doubling down on select names in this hated industry…

The Dominoes Are Starting to Fall

It’s no secret: The legal cannabis sector has been undergoing a major washout. Over the last year and a half, the cannabis sector, as measured by the industry benchmark Horizons Marijuana Life Sciences Index ETF (HMLSF), has been down as much as nearly 70%.

But just like I saw with crypto in 2019, I’m seeing signs of life come back to the cannabis sector.

Take a look at the chart below… 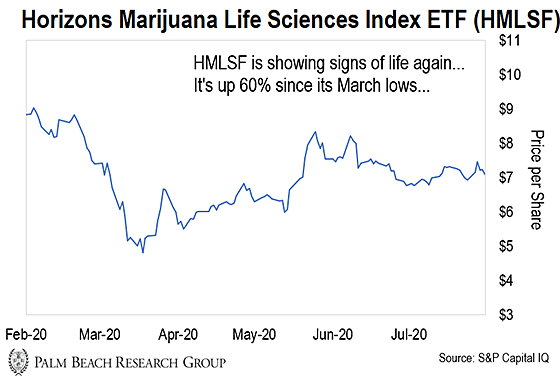 As you can see, HMLSF is up nearly 60% since its low in March. But it’s not just the price action that’s improving. So are the fundamentals.

Sales and tax revenues have never been higher. In California, sales have averaged 53% higher than last year. Oregon posted a 58% increase in sales from last year. And Colorado recently announced record monthly sales of $192 million in May.

Think about that. Sales have never been higher, and yet these stocks are still in the toilet.

On top of booming sales, several tailwinds are lining up to ignite a huge rally.

The first is wider state legalization. Look, it’s no secret the states’ tax revenue base is getting crushed…

According to the National Association of Counties, local governments will see a $198 billion loss in tax revenues due to the COVID-19 outbreak. That’s not even considering losses at the state and federal levels.

Taxes on cannabis sales can help fill that gap.

In 2019 alone, the sector pumped $1.9 billion in taxes into state and local governments. That’s a massive statement from an industry that is still illegal at the federal level.

But that’s just the start…

A report from Prohibition Partners projects the global cannabis market will swell to $103.9 billion by 2024. That’s a potential $10 billion-plus honeypot of tax revenue.

The pandemic forced many businesses to close indefinitely… But some states deem medical cannabis “essential,” just like grocery stores and pharmacies. That’s huge tacit approval by state legislators of the importance of cannabis sales.

That’s why we think this fall, we’ll see an even bigger catalyst hit the cannabis market.

In November, several states will vote on whether to change their cannabis laws. The biggest fish is New Jersey. If New Jersey votes to legalize cannabis, New York, Pennsylvania, and Connecticut will have to follow.

If not, they risk a river of tax revenue flowing out of their states into New Jersey as residents trek over into the state to buy cannabis.

Here’s How You Make Money

Once sentiment finally catches up to the reality of booming sales and increased legalization… we’ll see a new upcycle in cannabis just like we’re seeing in crypto.

I know downturns are no fun to sit through. But our experience in crypto has taught us that – so long as you use small, uniform position sizes – you can weather these pullbacks.

But the beauty of these plays is you only need a small stake to make large gains. That’s why we call them “asymmetric plays.” The amount you can make versus how much you have to risk is wildly out of proportion to your initial investment.

For instance, I’ve had readers who saw $1,000 investments become worth over $1 million. That’s the true beauty of early-stage investing in assets like crypto and cannabis.

So remember, you don’t have to risk much for life-changing gains.

As long as you position-size correctly, you don’t sweat the volatility. And believe me, we’ll see lots and lots of volatility. Back in 2014–15, there were times when the entire crypto market was down an average of 70% or more… before roaring back thousands of percent in 2017.

We’ll see similar volatility in cannabis. But that’s fine, as long as you use small, uniform position sizes.

That’s why I suggest – where appropriate – to consider doubling down on quality cannabis stocks you own that are trading below a price-to-sales ratio of 1.

If you want a simpler way to play this trend, consider HMLSF. It holds a basket of top legal cannabis names… And it’ll give you exposure to the entire space.

P.S. As I mentioned above, we’ll see a new upcycle in cannabis once bullish sentiment returns to the space.

But while the market’s shake-up has left cannabis stocks undervalued, the best setups are in the private space. Even if the market remains volatile, these companies can stay private until the conditions are more favorable.

And right now, you can still get into these private deals for as little as 75 cents per share.

But you must act now. These companies will be closing their doors to new investors soon…