Nick’s Note: The electric vehicle (EV) revolution is opening up a big money-making opportunity. And one of the best way to profit from this megatrend is to speculate on the key metals that go into EV batteries.

Today, PBRG friend and commodities expert Dave Forest explains which one of these metals could end up being the biggest winner… And why you need to add it to your portfolio today…

In fact, the fate of entire civilizations can pivot on access to natural resources like gold, iron, and oil.

Over my 20 years in the natural resource business, I’ve visited many parts of the Earth—the Siberian Tundra in Russia, the jungles of Colombia, and the remote beaches of Indonesia.

I’ve done this partly to look for mineral discoveries… But also to understand the political intrigue that’s always swirling around strategic metals.

In 2015, I had the opportunity to tour with one of the largest government mining enterprises in Asia for a week. Executives from this firm had come to South America to inspect some of my projects for potential investment.

Over the course of the week, it became clear that this group was extremely focused on finding and securing supplies of one particular metal… a commodity it felt was essential to the future survival and prosperity of its entire nation.

This metal was so important to the group, it was willing to venture almost anywhere on Earth to find it. The group had billions of dollars in reserve to buy projects that would help them ensure a steady supply over the coming decades.

When we hear about “strategic metals” like this, we usually think of commodities that aren’t widely understood, such as rare earth metals.

But these deep-pocketed buyers weren’t looking for those metals. It’s a market that’s sitting right under most investors’ noses—who don’t realize that there’s a heated race going on globally to lock down mines that produce this critical commodity.

Governments around the world are rushing to secure copper supplies wherever they can be found.

Why? Just look at the chart below. 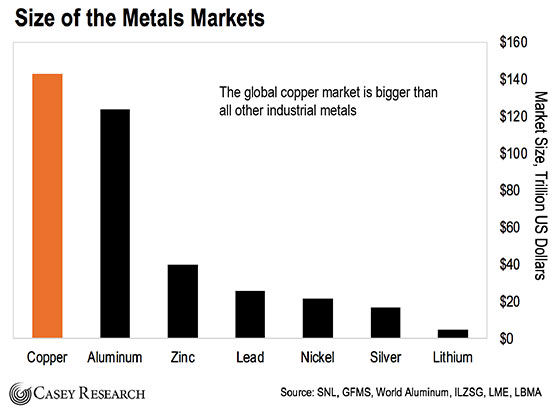 The global copper market is bigger than all other industrial metals. The value of copper bought and sold around the world is seven times larger than other metals, like nickel… and about 30 times larger than the global market for lithium.

Historically, much of that copper demand has been driven by infrastructure building. Copper is essential in making wires used to transmit electricity.

So when countries like China and India launch large-scale urbanization programs like they have been of late, they need copper to power all the new areas popping up.

Infrastructure building alone has been enough to keep copper demand buoyant for the last decade.

But the race for this key metal is about to get even more heated… because of the next wave of development in electricity infrastructure.

I’m talking about the widespread rollout of electric vehicles (EVs).

If you think about it, this makes perfect sense. Copper is the go-to metal for making electric wiring. EVs need a lot more wiring than traditional vehicles do—to move electricity from the car’s battery to other sections of the vehicle.

How much more copper does an electric vehicle need?

A lot more. The chart below shows the results of a study from the International Copper Association on the increased demand for copper coming from EVs. 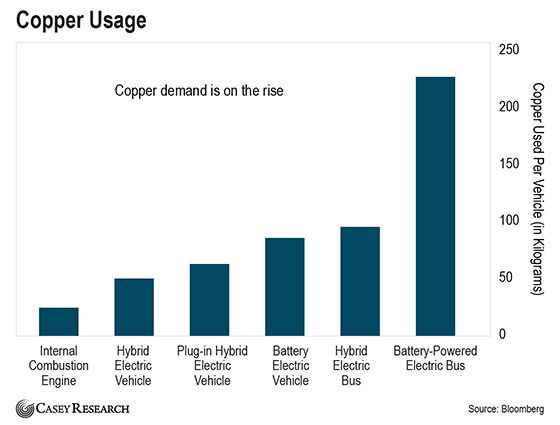 As you can see, a traditional internal combustion engine – an engine that generates power by burning gasoline, oil, or other fuel – uses 23 kilograms of copper per vehicle.

And that’s just the start. If we move to fully battery-powered vehicles, you would need 83 kilograms of copper to make one car. That’s a 260% increase in copper requirements.

Market studies show that this increased copper demand is going to ramp up fast as EVs roll out all over the world. By 2020, copper demand for EVs is projected to double from 2017 levels—which will be around 400,000 tonnes per year.

This means copper demand for EVs is projected to rise nine-fold from 2017 to 2027.

Remember that exponential surge in copper demand for EVs is coming even though global copper supply is already tight. Just based on demand for regular infrastructure, copper buyers around the globe are sweating to figure out where they’re going to get all the metal they need.

I’ve seen first-hand how hungry the world is for copper right now—and the EV revolution is going to send a major shock through an already tight market.

In my International Speculator newsletter, we’re set to profit from this crisis. We’re doing this by buying the best copper mining companies on Earth—before most investors realize just how critical copper is to the EV supply picture.

When the supply crunch hits—which could be very soon—it’s going to cause a copper price spike that will lift all stocks in this sector.

If you haven’t already, it’s time to add some copper exposure to your portfolio.

P.S. I just released a brand-new video presentation that details one of the best moneymaking opportunities I’ve come across in my career. This isn’t something you’ll hear about from the mainstream media. But a radical new technology is about to take down the world leader of electric vehicles, Tesla…

Some are calling it Elon Musk’s worst nightmare because it could make 3.1 million electric vehicles obsolete. And one tiny company may be responsible…

For the first time ever, join self-made millionaires and “founding fathers” of the financial publishing industry, Bill Bonner, Doug Casey, and Mark Ford for a candid conversation about investing, the economy, their business, and a behind-the-scenes look at what they’re doing with their own money…

It’s called An Evening with Bill Bonner, Doug Casey, and Mark Ford. And it will air 8 p.m. ET on Wednesday.

You’ll also receive a special one-time only invitation you receive just for watching: a rare opportunity for you to partner with Bill, Doug, and Mark in their latest and greatest venture…

Click here to reserve your spot for this free event today… 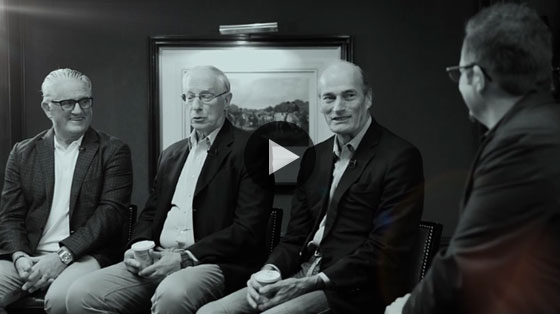