There’s an old rule in technical analysis… The wider the base, the bigger the breakout.

During my 15-year career on Wall Street, I used technical analysis to spot trading setups with explosive upside.

The last time I wrote about a technical setup like this was in 2016. 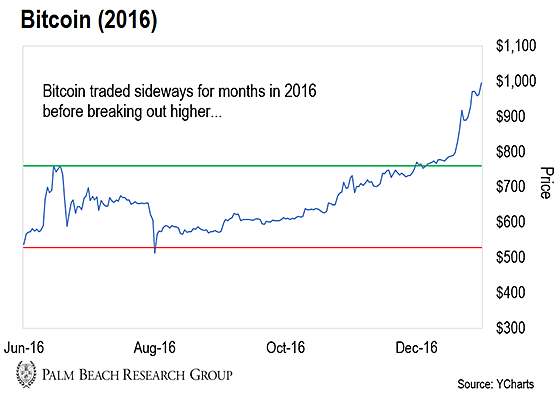 Here’s why I’m telling you this…

In 2016, bitcoin hit a rough patch for months… But all of a sudden, we had these explosive moves higher in 2017.

We’re seeing similar sideways action right now. But there are multiple catalysts that didn’t exist in 2016 that do now. And they’ll take bitcoin higher in the coming months… 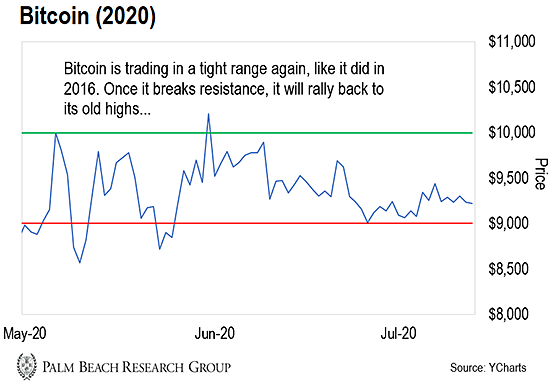 From a technical perspective, when bitcoin breaks resistance… it’ll head back to $12,000–16,000 right away.

This is the exact path bitcoin took back in 2016.

Now, I’m not saying we’ll see bitcoin rally that much right away. What I am saying is bitcoin has more catalysts behind it now than it did in 2016…

For the past three years, I’ve told you to bet on Wall Street greed.

My narrative is financial institutions will turn to crypto as a new source of fee-generated revenue. And they’re building the on-ramps to do that.

This is huge news…

And there’s another source of demand for bitcoin: Millennials.

This global younger generation is set to inherit about $68 trillion worth of their parents’ wealth. In my opinion, a lot of that money is going to find its way into digital assets.

According to one survey, an overwhelming 88% of millennials say they want to own crypto as an investment. And studies show bitcoin is one of their favorite investments.

So we’re seeing two mounting sources of demand for bitcoin… while, at the same time, incoming supply is being cut in half.

Prices have nowhere to go but up…

Look at the Big Picture

This year, I’m highly confident we’ll see a major brokerage firm offer bitcoin trading to its tens of millions of retail customers. (The Fidelity-Kingdom Trust partnership is a step in this direction.)

As soon as that happens, every other major brokerage firm will fall in line. It’s pure supply and demand. The story here couldn’t be simpler.

So what I’m going to focus on is what I’ve always focused on when making large amounts of money: the big picture. If you can get the big picture right and position yourself for the big-picture move, that’s all you need to do.

Every financial institution – from large central banks to small family offices – will hold some bitcoin in their portfolios. That is the future for this asset class.

On top of that, we’ll see millions of millennials come into crypto. They’ve grown up with digital money. So it’s a no-brainer for them.

I will tell you this now: You’ll look back a few years from now, and it’ll blow your mind how mainstream crypto trading will become.

So if you find yourself bored with bitcoin… or worried about its future… just remember, the wider the base, the bigger the breakout.

Because when bitcoin breaks out of its current trading range and goes back to $20,000… it will probably go to $70,000–80,000 on its next bull run. And bitcoin’s run will spark a massive rally in the rest of the crypto market.

P.S. As I mentioned above, a breakout in bitcoin will spark a massive rally in the rest of the crypto market, too. And I believe that’ll make crypto’s underlying blockchain tech the best-performing investment idea of the decade.

Not only is it the backbone of bitcoin, it’s also disrupting industries from finance to supply chains to health care.

In fact, I’ve put together a special presentation to pull back the curtain on this trend. I firmly believe it will be the No. 1 investment of the 2020s…