I’m sure Daily readers want to know if this is a short-term spike or the beginning of a new crypto bull market. So I tracked down Teeka after his long flight from Canada back to Puerto Rico to get his take…

Nick: Thanks for taking time to talk to me, T. Last month, you told us bitcoin was going “a lot higher.” Can it continue climbing?

Teeka: Nick, this is the very beginning of a much higher move. In fact, I think bitcoin is reaching escape velocity.

You see, this recent rally is happening while the trade war between China and the U.S. is heating up.

And here’s why that’s important…

Investors are concerned tariffs will hurt stocks—and sold… Since President Trump began ratcheting up his rhetoric last week, the S&P 500 is down 4%.

Now, I think this is just a short-term dip for stocks. But I’m not saying it won’t go any lower, either… In fact, I’ve even established new positions to take advantage of this pullback.

Still, the trade war is just an overblown story. A deal will get done. Both President Trump and President Xi are pandering to their constituents. They’re just playing hardball to not appear weak.

The bottom line is: China needs us more than we need them. So the U.S. has the upper hand. And eventually, we’ll get a trade deal because of it.

In the meantime, trade war fears will impact stocks. But for bitcoin, this is irrelevant.

Bitcoin is completely disconnected from the business cycle. Do you know of any other asset like that?

Nick: I can’t think of any. But why does that make bitcoin a good investment?

Teeka: Because it’s an uncorrelated asset.

Now, correlated assets move together in price direction. For example, large-cap companies usually move in the same direction as the S&P 500.

And assets with inverse correlations move in opposite price directions. For example, when the U.S. dollar goes down, gold prices usually go up.

And right now, traditional asset classes—stocks, bonds, and commodities—are mostly moving in sync with each other.

So I’ve been saying for years that we’d see institutions add bitcoin to their portfolios to smooth out volatility and increase risk-adjusted performance.

In the future, crypto assets will be in every major institutional portfolio. That’s why I called 2019 the year of Wall Street greed. And as we can see by bitcoin’s recent price action, that narrative is emerging.

Nick: Can bitcoin handle this tidal wave of institutional money headed its way?

Teeka: In short, yes. The price will have to go up, but bitcoin can handle it.

Naysayers have argued that bitcoin can’t handle any more traffic because it slows down the network and makes transactions expensive.

At one time, that was true. But not anymore. Solutions like the Lightning Network enable thousands of transactions per second.

In the 1930s, the U.S. mostly had dirt roads. And that was fine for the time. But today, we can transport millions of people and trillions of dollars in goods across the interstate system.

And bitcoin is experiencing that same type of transformation now.

Right now, it’s a tributary of minor roads built for people on bicycles. It wasn’t initially built for 18-wheelers… But that infrastructure is finally coming together. And it’ll change the face of crypto and bitcoin.

So when Wall Street can pile in its 18-wheelers full of cash into bitcoin, it’ll push the entire crypto market up—probably higher than you think is possible.

Nick: And what should crypto investors do now?

Teeka: Start your positions and hold on… And like I always say, let the game come to you!

Nick: Thanks for the update, T.

Nick’s Note: As I mentioned above, Teeka just returned from Canada, where he was on a fact-finding mission for his next big non-crypto idea. We’ll have more from him in the coming weeks on this life-changing opportunity.

Meanwhile, we’ve been getting many questions about the massive crypto rally. And Teeka will be holding a live Q&A webinar in the coming days to address them. You can send your questions to him right here. Stay tuned.

From Tom L.: I want to thank Teeka for uncovering income-earning cryptos. As cryptos are maturing and taking off, I feel like I’m ahead of the crowd.

From Mark S.: Thank you, Teeka, Greg, and gang! I doubled-down last month on cryptos—and appreciate your timely guidance! Our positions have almost doubled so far. It’s a relief being part of this group and having this confidence when making investment decisions.

TEEKA HAS A SPECIAL INVITATION FOR YOU…

I want to share some exciting news with you: I’d like to invite you to be my guest at the second annual Legacy Investment Summit in Southern California during September 23–25.

I’d love to get the chance to shake hands, chat, and hear your stories. Plus, you’ll get to attend presentations, cocktail hours, and other events with me, my analysts, and some of our industry’s biggest investing legends.

Click here to find out how you can accept my invitation at a discount before May 31. 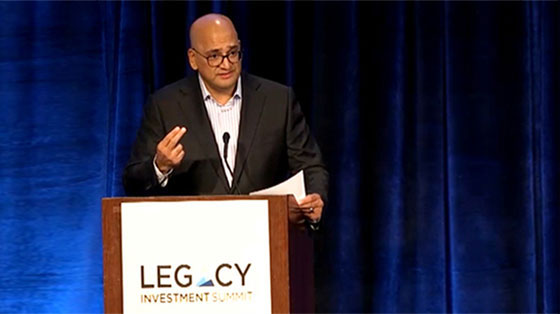